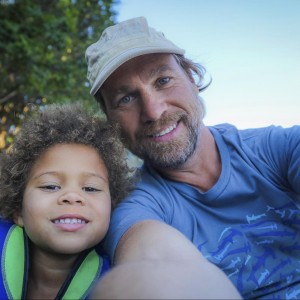 We’ve stayed at Drifters camp for 6 days after coming out of Nxai Pans. Here we could enjoy the tranquil surroundings next to the Boteti river. It was also nice to camp on grass again. The managers, Cronje and Anita, and staff let us feel right at home. From here we could do our washing and shopping in Maun. We went for pizza a few times and it was a nice change from ‘camp food’. Thanks to Tjaart van der Walt for pulling our broken caravan out of the sand and taking it to Maun where he repaired it like new.

Pienkie even made me a Botswana skirt

My dad’s work station at Drifters, with my own cinema station

From Drifters we moved on to Moremi where we stayed for a week in various camps. It was our first time in the Delta and it really lived up to it’s reputation. It was dry and the pools are mainly dry or drying up but still we saw a abundance of animals. We were lucky to see cheetah with a kill and even a caracal, but lion eluded us here.

Here I am standing on Third bridge, rickety bridge that I rather preferred walking across then riding with dad in the car

Our camp at Third Bridge under a enormous Jackal Berry tree.

The trees in the delta are just enormous

Another bridge to cross

Even the monkeys cross the bridge

Queen of the hill

From Moremi we went back to Maun for 2 days to stock up and refuel the car and then we moved on to Savute north of the Moremi. This is supposedly lion kingdom and these lions even starred in numerous national Geographic films. And it was truly a lion festival for us.

One of the numerous camp invaders. This one stole 2 rusks and was eating it with so much enjoyment right there infront of us. They also stole a big bag of spaghetti and after that spaghetti was raining down on us from the tree.

Elephant walked through the camp all the time and lying in our small tent and dwarfed by one of these giants make you feel very small.

Another visitor at camp

The mornings now get really cold and it’s difficult to get out of the pj’s.

Our campsite in the Savuti aptly called Paradise

We had a lot of funny moments on this trip. One of them happened in the Savuti. We were sitting at the Maraboe waterhole and my dad was taking pictures of the Lanner falcon chasing the doves around. On one such occasions the Lanner Falcan chased the dove right towards us and instead of swerving away it flew right into the back window where I was sitting. The falcon swerved away at the last second. The dove was fine and we released it.

We came upon a lion pride early one morning next to the road. My dad started photographing them and had to close the window because they were very curious and wanted to jump up. Then they moved to the back of the car and stared biting the back tyre. We had to drive away and they followed us for a distance before their mothers called them back.

We again met the most amazing people. We specifically want to thank Richard, Chippie, Nick and Sally for the great company at Xakanaka. Also the 3 Austrian doctors Christina, Ben, Doris and Gary the Engineer from RSA/ Nam that invited us for a fantastic steak braai at Khwai river campsite and eventually giving us all their excess food and even a coffee maker. Also thank you to the cool young South African group that also invited us for a braai the last night in the Delta.

Amazing people we met that are now our friends

We also met Henry, a very interesting guy that works for National History Film Unit of Botswana. They are selling film content to National Geographic and other media outlets. They get a week or 2 stint in the Savuti and can follow the animals off- road when they film. He even sleeps on top of his open vehicle out there with the predators. Very brave. We had great conversations and a great braai together.

It’s not only the animals and sightings that makes this trip memorable but also the amazings people we meet.

Our last night at Khwai river we were watch by a hungry hyena from the edge of fire light. But my dad told me to wait in the tent because I will just be like a snack for it.

We are back in Namibia for some family time and soon we will cross to Zambia for the next part of our journey.

It was all about the journey

Don't miss our news and updates